The Fashion Week Season in Paris and Milan is over and autumn is coming. Fog and wetness are spreading allover – just bad weather. Of course, after two dry summers, nature urgently needs the rain and I love the sound of rain splashing on the roof. But honestly, when you have to go outside, rain and humidity can also be pretty uncomfortable. Everything is clammy and if there is wind as well, even short errands become a torture.

My old umbrella is actually more like a “surprise egg”, i.e. it jams when opening, which seems to be due to a broken central rib.
That needs a change. After a short search on the internet, I found what I was looking for at “Ombrelli Francesco Maglia”. There is obviously still quality work combined with modern design and high-tech expertise. Maglia mainly manufactures hand-made umbrellas or customized designs. Similar to a modular system, you can choose from many different sticks, handels, fabrics and color components. Why haven’t I heard from this company with headoffice in Milan any earlier? And in general: aren’t there only manufactures of umbrellas in low-wage countries left?

I want to take a closer look and arrange for an on-site appointment. I promptly receive an invitation to take a look at the laboratories/ production sites by an individual guided tour. Almost hidden in a semi-basement, I am given a friendly welcome by “Francesco Maglia VI”. That sounds like an old noble family, umbrella nobility. The young man and his eight female employees (most of them have been with the company for years and are highly specialized workers) like to show transparency, although the traditional company lives on its competence and technological advantage. One could almost speak of a artistic handicraft.

A lively conversation develops spontaneously, which at first takes an unexpected direction. On rainy days, he says, people sometimes ring the bell to quickly buy an umbrella and then turn away indignant when they learn about the price; they would even offend him. Yes, quality has its price, but if you have to pay for it, the often preached sustainability and resource conservation suddenly have obvious limits – including decency.
He opposes the throwaway society, tries to recycle every unused part and even repairs umbrellas from other quality manufacturers that no longer offer this service. Until 1990 there were still around 100 umbrella factories, today there is only a handful left. A middle price range, as it was the case with the German company “Knirps”, for example, no longer exists anymore. 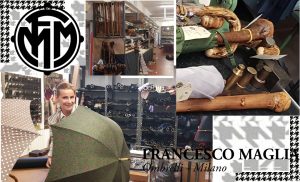 An umbrella for life-time
Maglia manufactures everything from a single source and assembles each umbrella by hand in 70-100 work steps. Only some of the different woods such as Canadian maple, Japanese bamboo or Africa ram’s horn necessary for the sticks and handle ends are imported. The rest of woods, such as cherry, hazelnut or chestnut, as well as the suitable leather comes from local production. Nevertheless, in some cases there is a risk of bottlenecks due to drought or air pollution if the production cycle is not planned far enough in advance. All fabrics are specially woven for Maglia by local companies (mostly in Como). This is because the know-how of quality and impregnation must be preserved. The flood of information is even greater than expected. However, Maglia has a very informative website that provides extensive information on the manufacture, its individual components and products.

Accompanied by Weimeraner dog “Fufu”, we start the short tour, because the entire production area measures no more than approx. 600 square meters. Every centimeter of space is used for production or storage. Small handicraft units and niches equipped with grinding and drilling machines or other vices alternate with high shelves filled with countless rolls of fabric or boxes with rings, eyelets or other metal parts. Various wooden sticks lie on a solid hardwood table from the founding years of the company, some still in raw state, others already polished and finished. Right next to it are individual ribs/ spokes and several umbrella frames that have already been put together. The young boss of the family run business in the sixth generation (since 1854) touches some of the wooden stick almost affectionately and asks me to smell it. The knotty olive wood knobs – instead of the usual curve handles – are his preferred grip material because he describes himself as “haptic”.
He spontaneously turns around an snaps a rib made of steel-carbon fiber. It can be bent in a circle like a gymnatic expander which immediately springs back into its original shape when released. No wonder that the companie’s best (reference) customers are located in northern Germany, Great Britan and Scandinavia – since nothing can break even during stormy weather. 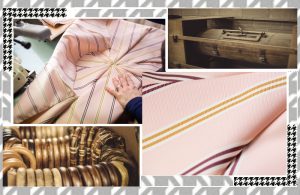 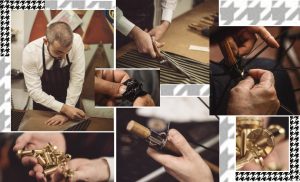 Now we approach the string and fabric area, which are exclusively made in nearby weaving mills. Some of them are self-designed patterns, some are well-known designs such as pinstripes, paisley, burburry or polka dots. Spontaneously, the sight reminds me of tie collections or Scottish tartans. Some customers would stay here for hours (despite extensive pictures, information and a configurator on the website https://www.francescomaglia.it/, just to choose every detail. Well, High Fashion with a shelf life of 40-50 years (!). As soon as you swipe your hand over it, you can feel the robustness and a certain stretchability of the fabrics with a certain wax shine. During production, if possible, even the humidity in the particular countries is taken into account. By working with more or less seam allowance, the tension remains better/ longer guaranteed.

Maglia currently offers a range of 400 products, but is also happy to provide support when somebody wants to create his/ her own model. All you have to do, is to tell the company what material and colors you would prefer and you will receive sample suggestions including prices.

Traditional craftsmanship meets high-tech
Right next door is a fashion doll wearing a sophisticated cut rain cape with hidden seams. Seams in particular often have a density problem. His mother would like to launch intelligent rainwear and is already working on a sample collection – but the production costs for the general market are currently, unfortunately, too high.
Instead, he reaches for an inconspicuous tote bag sewn from leftover fabric. Anyone who has this bag becomes a real magician, because you could even pour water into it without leaking – the opposite protection-effect (similar to the well-known “Lotus”-effect). But this bag is really practical in the rain, because despite an umbrella, one side of the body often gets wet and with it everything inside.

While we are talking and Francesco is making various short phone calls to keep the business running, the four ladies present continue teasing and ironing undeterred. Apart from high perfection sewing, my guide is able to master all the work processes by himself, although he has actually studied laws. As per him nothing special. He sucked it up with his „mother’s milk“.

The devil wears Prada, the angles Maglia?
At the same moment, my gaze falls on an inconspicuous box with around 50 name tags stuck to the front. These include badges from a famous shopping temple in London and Paris, various international fashion trademarks and specialized designer stores. Francesco starts laughing, because these well-known customers are his clients, who let Maglia work for them and have their logos attached to “their” umbrellas afterall. So it’s no wonder that the Maglia brand as a company is only known to insiders and appears only in case of direct purchase. 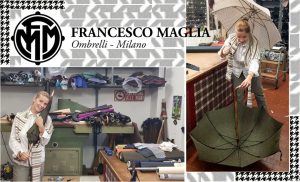 An average of 4,000 to 6,000 umbrellas are manufactured annually. In the next four weeks until the beginning of November it will be “high noon”, because by then 1,000 umbrellas that have been ordered should leave the company. Meantime the customers prefer to order at shorter notice in order to optimize trends and prices. Right now specially “Hahnentritt” and black-white check patterns are in fashion again.

Young Francesco Maglia still has a few projects “on the screen”, possibly also a cooperation with a French company.
However, Maglia e.g. maintains good relationships to fashion companies like Dolce & Gabbana and are also represented at show events such as the Hamburg Trunk Show. It is certain that Maglia umbrellas have already traveled on the Orient Express and found their way into some royal palaces. The range has also been expanded to include parasols (made of lace and natural fibres) for Japan and the US. Only a small, innovative company can respond promptly to such special requests.

Two hours have flown by and I still have so many questions. For those interested, here are a few more aspects nicely presented in a short 45 seconds video: https://www.youtube.com/watch?v=YIcKLlIrMvY

I’ll be back at the beginning of December to create my dream umbrella as a Christmas present. Although I like it extravagant, I will probably choose the favourite (winter) colors of the Italians: camel and dark blue, outside a paisley pattern inside plain alternately camel and blue. As a special extra, I would like to have some small ruffles along the seven triangle segments/ seams inside. Let’s see if this is feasible, because such a version is not yet in the program. 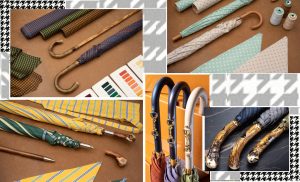 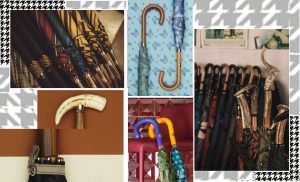 While shipping is guaranteed within 24 hours after receipt of an order, the production times are rarely less than three months, sometimes it takes even eleven months – thanks to full order books. Well, then it could be a present for autumn 2023. Anyway, it doesn’t matter, as the saying reads: “Good things take time”. I like to say: only what one has to strive for, is also given the necessary appreciation.

An umbrella by Francesco Maglia is an accessory that is reminiscent to the past but fits perfectly into the present and the future – an indispensable classic item that is particularly useful in rough times. Or another reason to sing and dance even in the rain; just like Gene Kelly in the famous film-musical.

remarks: many info but also some advertising