Everything was better before? Certainly not, it was different. But from a certain age, everyone has his/ her own objective and subjective views or beliefs about the past in this regard. The term “earlier” may also mean something different for everyone; sometimes you only guess to talk about the same things or the same period. Usually changes are caused by external circumstances that put the daily, well-known and comfortable rhythm of life up-side-down (we are not talking about Corona here!). Every change requires an effort and usually means breaking with habits that have become dear to you.
Just recently I was lucky to discover a very special “gem of former times” in the little island town of Malchow, which is beautifully situated in the Mecklenburg Lake District not far away from the more prominent village called Waren. https://de.wikipedia.org/wiki/Malchow 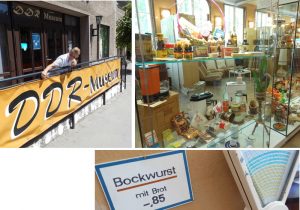 Close to the swing bridge, where a kind of boat parade takes place several times a day in the summer, there is a gray building with the headline “GDR Museum”. The museum at Kirchenstrasse 25 is a real “Once-upon-a-time place” and is located in the building of the former film palace from 1957. It deals exclusively with the multifaceted everyday life in the GDR – beyond politics.
The exhibition, which opened in 1999, shows memorabilia from 40 years of the GDR, i.e. exhibits on topics such as: weddings, school, youth consecration, working life, household goods, clothing (including the blue FDJ blouse), photo / film / radio technology, children’s toys and much more. Everything has been lovingly put together and is carefully placed. Some items are in glass cabinets, other rooms contain a complete living room, bathroom or kiosk equipment. There are so many details to discover that as a “Wessi” you first have to develop an eye for them. In a showcase on the ground floor, a luxury gift basket is immediately noticeable, as what was common in the East and West at that time. It was often presented on special birthdays or company anniversaries. Including various liquors and types of coffee such as Mokka-Fix. Occasionally, also some “had currency trademarks” were available and therefore also on display, such as Eau de Cologne or Lux soap. Both were obviously very popular gifts for the so called “youth consecration” (a kind of non-religious counterpart to the protestant confirmation). 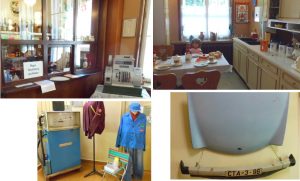 Beyond the staircase to the first floor, an original entire hood of a “Trabbi” plus bumper is emblazoned on the wall – all in typical light blue. https://de.wikipedia.org/wiki/Trabant_(Pkw) An original gas pump and two Minol gas station attendant uniforms are positioned directly opposite. Touching is expressly permitted here. At this point I enter into a conversation with another visitor of the exhibition. The gentleman in his mid-fifties strongly confirms that everything here is really authentic and looked exactly the same. He smiles a little wistfully. Of course, the so-called “Trabbi” was not made of cardboard, but of “Duroplast”, a layer of plastics that was glued together several times, similar to glass fiber. As small as the car was, everything could have been done and transported with it, he continues. The small vehicle was more or less “unbreakable” and at least for dexterous practitiones it was always repairable. If you had steady hands and a few relationships, a lot was possible “in the past”. In any case, it was advantages to live on the country side or having a small garden. Today everything has to be paid for … He says what he is thinking and I like that.
It is generally noticeable that despite the bright sunshine, numerous visitors take a look inside. To my surprise, however, they are almost exclusively from the new federal territories. That means the visitors don’t come to see how everyday life in the GDR was like at the time. They come to find “the gone-by time” again. An “ostalgia moment” for those who have experienced all of this themselves or who now want to show it to their grandchildren. “Longing for yesterday” may be the wrong term for it, but yet the recognition of objects such as a semi-automatic dishwasher, various children toys or school utensils, etc. seems to trigger typical flashes of a smile. 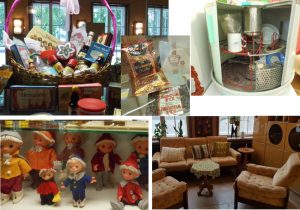 It reminds me a lot of the so-called “return tourism of the Wessis” as we know it travelling to East Prussia or Silesia. People don’t come to stay or to turn back the clock, they rather want to re-experience a piece of (carefree) childhood for a few hours. If you take a look into the museum’s guest book, my impression is confirmed. A little review of a time that will not come back or of a state that no longer exists. I can understand this attitude very well, because the former citizens of the GDR did not consciously emigrate to another country; a new system was simply imposed on them. First of all, dealing with cashmachines, a new currency, insurances, waste separation or mega shopping carts in the supermarket etc. had to be “adapted”. This phrase may sound banal. But it is not when everything happens at the same time, when the job was possibly in danger and a rental increase had to be expected.

“It wasn’t all bad”, a lady mentioned at the end of my tour, somewhat shyly. Of course not, and you should be able to say that without hesitation. Doing so, nobody should be called a “red sock”, a “forever yesterday” or a “regime supporter”. To hear that one’s life is defined as generally bad in a way from the outside persepctive, is painfully for everyone and certainly incorrect. Without going into more details, I spontaneously could think of the positive sports promotion system, sufficient children day care centers or job security. When comparing then and now, it is also important to always remain fair. It’s not about the year 2021 and the antiquated GDR in 1980. In West Germany, too, the look of sofas and kitchens in terms of color and style, from today’s perspective, is somehow a question of habituation. Of course, there were considerable deficits. The shortage of goods and a reduced product quality due to a lack of raw materials should be noted critically. A little like the motto: You don’t need what we don’t have.

Oh yes, but one thing has outlasted all obstacles. Besides the traffic light men-sign, you could even say has prevailed, the East German Sandman. While the 5-minute Sandman-stories of my childhood have disappeared from the TV program, the melody “Sandman, dear sandman, it’s about time to go to sleep” … or something similar, can still be heard today on MDR and RBB between 6:00 p.m. and 7:00 p.m. Of course, the exhibition also shows a complete range of sandman figures. The small “Allday-life-Museum” is an exciting journey back in time to the last century, where everyone can rediscover a piece of his/ her personal past. Free of any clichés. 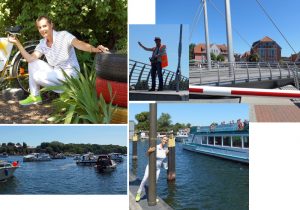 What else has the little town to offer today, besides an all-year-round ice rink? Just go on a discovery tour in and around MALCHOW yourself … the Highway A19 will get you there quickly.

Singing in the Rain