It may well be known that there are around 300,000 Russian-born citizens living in Berlin and that the “Charlottenburg” district is also popularly known as “Charlottengrad“. Among others, also bestselling author Wladimir Kaminer and his extended family lives in Berlin. I once met him  “from the front row” at a reading in Wismar. There is something very amusing about his narrative to explain and interpret the attitude of life and political system in the “previous century” (that’s how he likes to describe his time in Russia respectively the time before the lifting of the “Iron curtain”) as well as his way of dealing with todays daily life.

But also in Potsdam, in the immediate vicinity of the Sanssouci Palace, you can experience a little piece of “Good old Russia” every day in a wonderful environment. 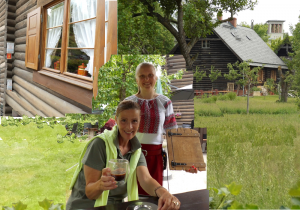 In the “Russian Colony ALEXANDROWKA” there are a dozen two-story log houses, each with its own garden, in a beautiful park and orchard landscape.

In 1826 Friedrich-Wilhelm III. build the settlement as a new home for 12 choirs and their families. When giving the name, the shortly before deceased Tsar Alexander I and the friendship between the noble families of the “Hohenzollern” and the “Romanovs” were remembered. The complex in the form of an Andreas cross was designed by no other than the well-known landscape architect Josepf-Peter Lenné. Today it is a kind of center for apple science (pomology) with over 300 old apple varieties. In the heart of the park there is also a small café-restaurant and tea room with a samovar, where you can get traditional Russian dishes. The “boyar coffee” (with cinnamon, coriander and icing) and the “tsar blinis” are worth a sin. Accompanied by some balalaika sounds or some Russian pop, you can linger here and dream of A. Chekhov’s last work “The Cherry Garden”. I also like to drink a glass of cool “kvass” here on hot summer days. https://de.wikipedia.org/wiki/Kwas I describe its taste as a mixture of malt beer, stale cola and some liquorice. There is also a small museum not far from the restaurant.

However, you can buy good Russian groceries in Potsdam’s “Ledo-Laden” in the city center. The assortment ranges from Crimean sparkling wine till the famous Osietra caviar (each can is recorded individually for customs), as well as all sorts of other food such as pickled vegetables, filled dumplings / pierogi, pastries or honey. But be careful, the Russians like it spicy. A lot of things are quite hot compared to our taste, especially the delicious mustard and the paprika ragout. 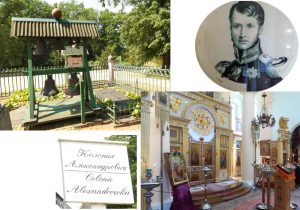 Not far from Alexandrowka on a small hill is the Russian Orthodox Alexander Nevsky Memorial Church. Orthodox services always take place standing up and drag on for quite some time accompanied by  murmuring prayer songs. But lighting a candle with spherical sounds has something magical (please note that taking photos inside is not welcome).

A little outside of Potsdam in the “Berlin Forest” not far from “Peacock-Island”, with a wonderfully elevated view of the Havel river, you can discover another piece of Russia: Nikolskoe.

Again only a few steps away from Alexandrowka is the “Belvedere” on the “Pfingstberg”. In view of the imposing castle-like renaissance complex, you may imagine to be in northern Italy or Tuscany. But Italian life in Brandenburg is a different, no less interesting story. Do swidanja Rossia, ciao dolce vita Italiana. Till soon …

Singing in the Rain